Going Beyond with the Custom Line 106' 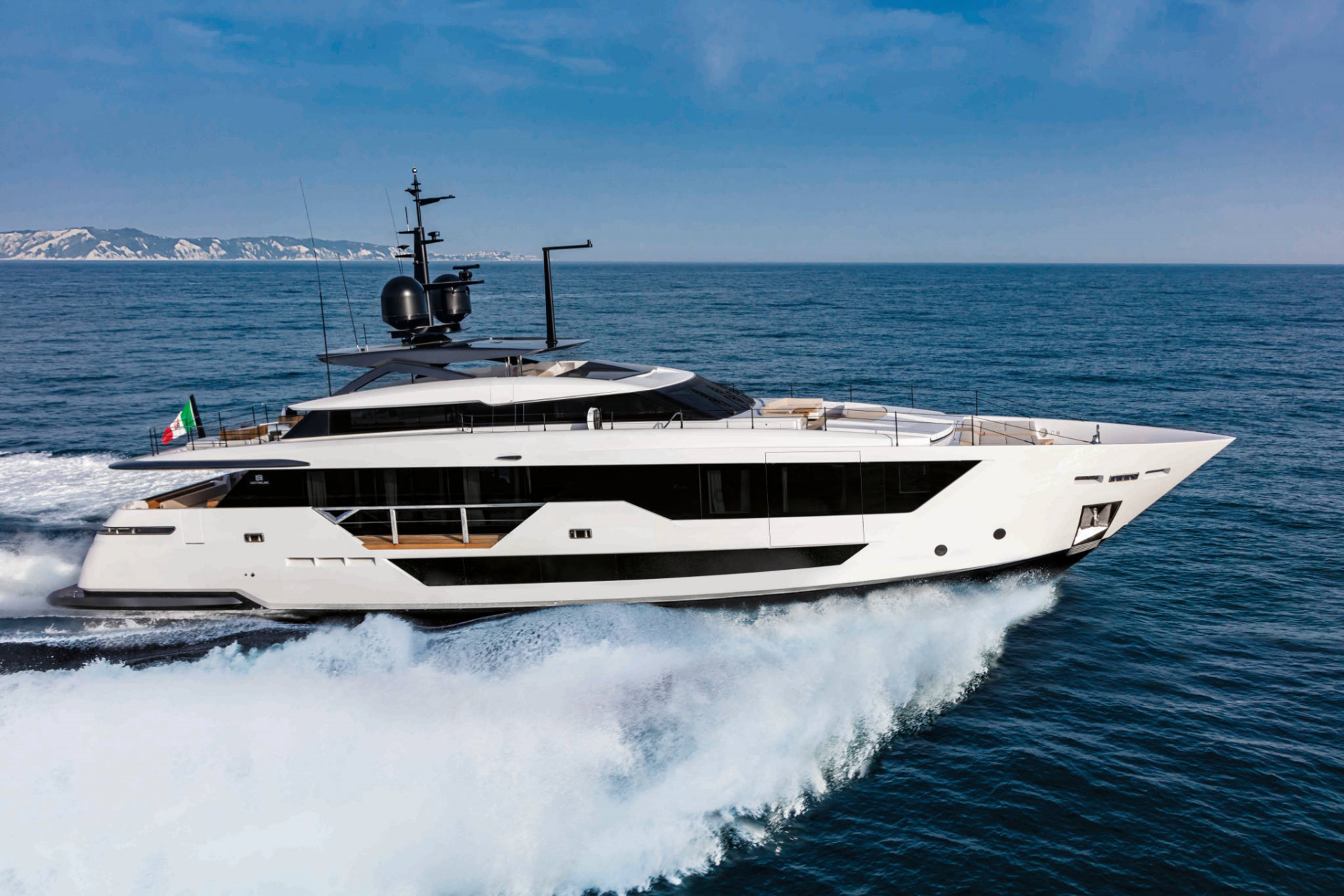 Custom Line has introduced another masterpiece for their gallery of yachting works of art: Custom Line 106’. The new designer planing yacht showcases a different view on timeless yachting with absolute brilliance. It boasts many factors of excellence and distinction, first and foremost its unmistakable design and expert organisation of the large volumes and spaces, all for the benefit of yachting comfort and life on board.

With its 32.82 m (107’ 8”) length and 7.30 m (23’ 11”) width, the Custom Line 106’ is a product of the partnership between the Francesco Paszkowski Design studio, Ferretti Group's Engineering Department and the Product Strategy Committee led by Mr. Piero Ferrari.

The design of the lines on the bottom and the hull help it to replicate and build upon the outstanding hydrodynamic performance of the brand’s updated planing range. The profile is sleek and powerful: taut lines run from the stern to the forward area, generating a spectacular alternation of materials and colours in the light structural surfaces and dark tinted windows. The hull windows are broad and ample, while a sense of direct contact with the sea is offered by the full-length deck windows, further expanded by their convex shape.

The style of the interiors, developed by Francesco Paszkowski in collaboration with Margherita Casprini, continues in the same vein as Custom Line's new planing vessels: it explores greater formal balance and there are distinctive, strong colour contrasts in the furnishings and coverings.

EXTERNAL AREAS
The new yacht is distinguished by 220 m² of exterior floor surfaces, all interconnected. Making a comeback is the revolutionary concept of the flybridge being directly connected to the bow through a spacious port walkway, while the starboard walkway leads to the cockpit, from which the flybridge is reached using the port stairway.

To the stern is an advanced version of the patented DMT - Dual Mode Transom system. It features two sliding doors that cover the stairs when the vessel is in motion, thus providing an unbeatably clean-cut appearance. When the ship stops, they slide inside the hatch so that guests can climb up. From the garage, a Williams DieselJet505 tender and a three-person jet ski can be lowered into the water.

The flybridge is surrounded by steel lifelines and protected by two large side windows. It spans a huge 53 m² and is entirely furnished with free-standing items: sun beds with sofas and cocktail tables are placed on the first unit. In addition to this area, there is a bar with grill, sink and fridge starboard before reaching the access to a private balcony. On the port side is the external helm station with a seat for the pilot and one for the co-pilot. The foredeck of the flybridge offers another area that can be configured as one likes at the yacht owner’s disposal, with the possibility to create a spa area with whirlpool tub. The entire space is covered by a hard-top incorporating two skylights to increase the brightness of the area.

Another distinctive element of this yacht is the forward area, further expanded and divided into three separate and independent areas. The raised central island is like a private sunset lounge, consisting of a large C-shaped sofa with reclining backrests and two coffee tables in the centre facing two separate sun pads. The bow area is enriched with another two large sun pads and offers an unprecedented view of the sea, spanning a total of 36 m² of usable surface area. In keeping with Custom Line tradition, this area includes an additional garage for a Mini Jet Williams 2.80 or a compact three-person jet ski. Bimini tops or canopies can be fitted to provide shade in all external areas.

The cockpit boasts an extra-large convertible sofa with an adjustable backrest facing a bar unit with a fridge and an ice maker on the starboard side. The moorings on both sides are covered by a teak bench that can be used as an additional seat. The entrance to the engine room is located on the port walkway.

The interiors of the main deck bask in the natural light provided by large floor-to-ceiling windows that increase the sense of continuity with the sea, creating a single lounge area with the cockpit when the large floor-to-ceiling French door is totally closed. An open space of 40 m² with heights exceeding 2 m creates a living area with L-shaped sofa, armchairs and low furnishings situated before the dining area with table and chairs, designed to accommodate 10 people.

Upon request, the central window starboard can be opened completely with an electric mechanism. The support columns used on the Custom Line 120’ can also be found here, with lighting, audio and air conditioning systems on them.

A bulkhead partition conceals floor-to-ceiling storage compartments. Two bronze mirror sliding doors separate the flows between the starboard guest area and the port service area. On both sides there are two doors providing access to the external walkways.

Going starboard and after passing the day head, stairs lead down to the guest area of the lower deck, whereas moving forward, you come first to the owner’s study before reaching the full-beam master cabin in the foredeck, measuring 6.50 m in width and providing the owner with spacious storage room, two dressing rooms and a large bathroom with dual facilities and a central shower. In the first unit, an optional panoramic terrace has been added. It swings open and provides the owner with a private area directly in contact with the sea.

The port side of the main deck leads to the galley, the crew area and the raised helm station. This houses the integrated bridge, developed with Naviop-Simrad. It is a single direct interface providing total control of the yacht’s functions, complete with touchscreens seamlessly installed in the instrument panel.

LOWER DECK
A large lobby separates the four large standard cabins on the lower deck: two VIP cabins amidships and two twin ones forward, all with separate bathrooms. The beds in the VIP cabins face the bulwark to make the most of the views straight out over the water at sea level, while an additional Pullman bed can be fitted in each of the two twin cabins.

The crew area located in the foredeck consists of a captain's cabin with separate shower and two double crew cabins, each with its own bathroom, to accommodate a total of 5 members. A spacious dinette with L-shaped sofa, galley and laundry room are at their disposal.

ENGINES AND TECHNOLOGY ON BOARD

It is equipped with electro-hydraulic stabilizing fins, offering both underway and zero-speed modes. On request, gyroscopic stabilizers can also be fitted for maximum comfort at anchor.

Custom Line 106’ comes with an innovative entertainment system built in collaboration with C.N.Sat, installed in the lounge on the main deck. It can be managed by an iPad, meaning that the various remote controls can be replaced by a single device. This technological solution can be extended to all of the different parts of the maxi yacht and it can also be used in conjunction with the owner’s personal devices.